Amsterdam was once the cycling capital of the world. It led the way in developing and constructing the best possible infrastructure for cycling. However, it is now losing ground to scooters. An anomaly in Dutch law has made it possible for scooters (not mopeds, and hence with no pedals) to take over Dutch cycle paths. 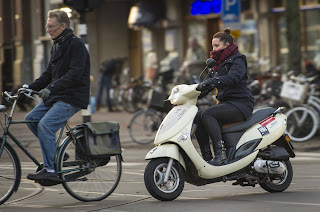 Cars are no longer a sensible way to move around the city and they drive on average at less than 30 k/hr. In the meantime, scooters that are supposedly limited to 25 k/hr average no less than 40 k/hr. As cars get hemmed in, more and more people are taking to the cycle paths - on bikes but also on scooters. As a result, the more vulnerable cyclists - the aged and the young - are less inclined to ride a bike and that can't be good for our health. Not that cycling in scooter exhaust fumes is very good for you. The situation has reached crisis proportions. As early as 2013, the four major cities in Holland called for measures to remove scooters from cycle paths, but this vital step is no nearer realisation.

Now at last Amsterdam is getting permission to tackle the problem, but only on a piecemeal basis. The government will make it possible to banish scooters from the bike paths, but only in certain circumstances. The city is planning to move scooters off the bike paths, make their riders wear helmets and join cars on the streets, but only on streets with "the busiest cycle paths". This would mean that scooter riders have to wear helmets on some roads and not on others. The result will be chaos and impossible to police.
I live on Bilderdijkstraat. This is one of the busiest cycle streets in Amsterdam, but the cycle path is only 1.80m wide and in some places even only 1.5m. Its status as main cycle route means the cycle path should be at least 2.25m wide. However selectively preventing scooters from using the cycle path here will be difficult and will probably only mean that parallel streets will be used instead. I'm sure that residents of Da Costakade and Bilderdijkkade are not looking forward to even more scooters. 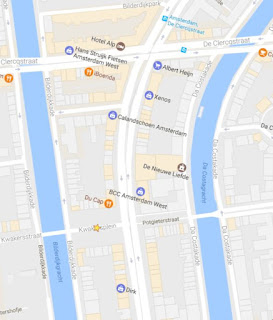 The whole situation only arose because scooter manufacturers and retail outlets exploited an anomaly in Dutch law. Mopeds and scooters with a limiter to stop them travelling at more than 25 k/hr have a blue number-plate and are allowed to use the bike paths and their riders don't wear helmets. Other scooters can drive at 45 k/hr on the road and their riders have to wearing helmets. They have a yellow number plate. However these real scooters are being overtaken in numbers and even in speed by the fake "snor" scooters. A normal 50cc scooter can drive at about 60 k/hr and without a limiter it is far less polluting. The obvious measure is to abolish the blue number plate. I'm convinced that this would also reduce the number of people on scooters.

The minimum measures necessary to rescue Amsterdam from the current situation is a blanket ban on any motorised scooters on cycle paths in the city. The final aim must be to banish scooters from cycle paths nationwide, abolishing the ridiculous blue number plate.

Posted by Martin Cleaver's blog at 10:28